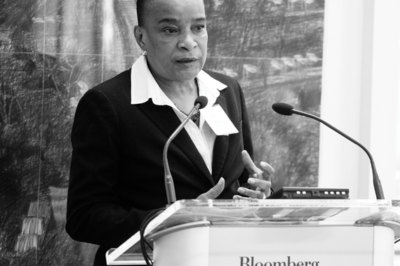 “If you can’t measure it, you can’t manage it.” That is our founder Michael R. Bloomberg’s mantra and one of the principals that guides everything we do at Bloomberg Philanthropies. We have found over the years that setting specific goals and evaluating success with actionable data has led to sustainable solutions, policy changes and learnings on how to “think differently about what we know”.

Often times there is little reliable information on behalf of groups that have been marginalized and placed at a disadvantage. It is critical for these populations to have a role in voicing their own narratives. In the absence of data and narrative, these groups become invisible. Despite fully participating in “work” and creating products that the world benefits from, these people have benefited the least. They have worked without the protections of fair market trade, inadequate safety conditions, or benefits that would support a secondary impact on their children and their families. There is a lack of information about this underground economy, which continues to grow while remaining heard the least.

Over the twelve years of Bloomberg Philanthropies’ investments in women’s economic development programs, we have been committed to providing measurable data about the progress of the organizations we work with. Dependable data allows us to help these communities tell their story of success. We know that our participants have become strong players in the market place, invested in their children’s education and the health of their families, and secured meaningful power in the global and local market communities.

As long as data on the informal economy remains scant and unreliable, women and their families around the world will be misrepresented and underutilized in the global economy. That is why the data collected in this report is critical and the work that Nest does is vital. Bloomberg Philanthropies has invested in Nest’s efforts to build a new handworker economy that connects craftspeople, brands, and consumers in a circular value chain improved by data. The organization’s Nest Guild network of artisan businesses is generating never-before-seen baseline data on the state of these businesses’ current practices and needs. This is combined with the newly launched Nest Standards and Seal, which are establishing an unprecedented means for brands to step into their own accountability and ability to drive change, by granting them visibility to their supply chains beyond the four-walled factory.

Together, these bodies of data are giving shape and color to the handworker economy. Nest’s State of the Handworker Economy Report is the first of what I hope will be many, lifting the veil on the world outside factories where hundreds of millions of people, mostly women, work and live. I guarantee you that you will find the information here eyeopening and valuable to any and all efforts to improve and understand the “world of work”.

Please enter your details below to download the report. Fields marked * are mandatory.

Thanks for submitting your details. Download the report using the button below: