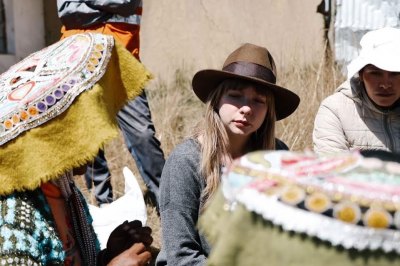 On the surface, Jennie Lyutskanov is a womenswear designer. After graduating with her degree from FIT and BA in Fine Arts (printmaking) at Atlanta College of Art, she earned her stripes at Ralph Lauren and Rag & Bone, where she designed denim, tops, and outerwear for both women and men. But somewhere between the hemlines and collars, a new interest began itching at Jennie’s creative sensibilities, tugging her towards bespoke textiles – beckoning her into the world of alpacas and natural dyes, pillows and throws. And somewhere far beyond the static of New York City traffic, the Andes were calling (in the silent and majestic way that they do).

Meanwhile in Peru, Threads of Peru, a Nest Guild business and nonprofit social enterprise with a mission to strengthen ancient craft techniques and empower artisans in the Andes Mountains, found itself nursing a similar interests. Already cloaking an international clientele of effortlessly fashionable folks in its soft-and-fair-as-can be baby alpaca garments and accessories – all naturally dyed and handwoven using 5,000 year-old backstrap loom techniques – the organization was keen to explore new design horizons.

Jennie and Threads of Peru were a Professional Fellowship match made in heaven. And while the story of their partnership started many months ago via emails chock-full of photographs and mood boards, this particular story zooms in on their work together in Peru, where over a month’s time, a new collection began to take form…

There I was in Peru, for the first time. I took the first couple of days to get my bearings and recover from a slight bout of altitude sickness. The new climate needed adjusting to, and my Spanish needed a good brushing-up. During my first week, I took daily Spanish classes in the mornings, and then spent afternoons working with Threads of Peru. 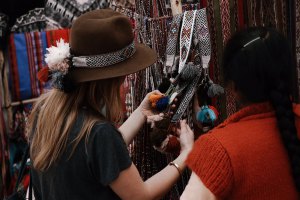 When meeting Threads of Peru for the first time, I sought to first establish a sense of how the business operates, hoping to understand the framework within which my work would take place. How does production work? How do you source? What were your most recent lines and what worked? What did not? What are your expectations of me? These were the types of questions I didn’t hesitate to ask – the answers to which informed my plan of attack moving forward. 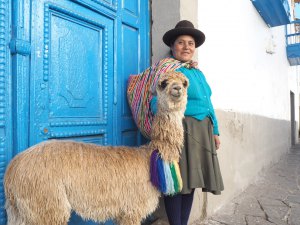 On my second day in the office, Sarah Confer, my host at Threads of Peru, pointed me in the direction of a collection of must-see streets in Cusco (the town of about 430,000 people that I called home during my time in Peru). I set out into San Blas, a tiny historic neighborhood with an up-and-coming energy and a prescient sense for what’s cool. Flanked by hillsides spotted with adobe style buildings, I pattered across cobble stone streets, ogling romantic old churches and restaurants leaking tasty smells.

While I had done heaps of research back home in New York, I was missing an understanding of the local marketplace. So my romps around Cusco had an important purpose: to feel out the home goods market in the area, uncover what resources were available, and sniff out opportunities for market differentiation and growth. 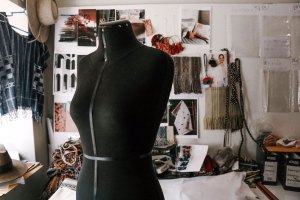 Following my field research, I was ready to begin work. There is no dedicated design space in the Threads of Peru offices, so I outfitted a pop-up workshop, sourcing design essentials like muslin, pattern making tools, and foam for a mood board from local shops. It took me 5 trips to various color copy stores to find a printer that could print at the quality we needed. Once set up, the Threads of Peru team and I began talking color development. Natural dyes yield unique colors that can be hard to replicate, so it was important for me to gain an understanding of the dye parameters. We thumbed through swatches and I unleashed the mass of images of colors I had brought along in my suitcase.

Threads of Peru is extremely sophisticated. It sells mostly through its online, but also has a significant wholesale client base which include upscale boutiques in the US and Europe, where it hopes to expand further. Sarah and the team at Threads at Peru explained that the business has never had a long term in-house designer before. As a result, they are searching for more cohesive creative direction. By designing a new collection together under my design direction, our hope was, and is, to expand the business, in turn growing employment and compensation opportunities for the artisans that Threads of Peru works with. Big goals, but we were all up for the challenge.

Our line plan was ambitious and there was no time to waste. I started designing – a total of 47 SKUs in 17 styles including designs for bags, small accessories, pillows, rugs, blankets, ponchos, scarves and a kimono. 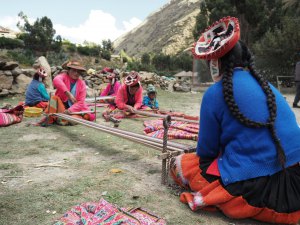 Along with the Threads of Peru team, I visited two communities to understand the techniques that the designs would need to translate to. Chaullacocha and Rumira Sondormayo each have a population of about 300-400 people, and each has also formed its own weaving association of 20-25 women. Each association observes its own rules and bylaws governed by a rotating president. On our drive to the villages, both nestled in secluded high Andean valleys (Chaullacocha, for instance, is located at over 4200m!), we passed through a series of microclimates where other communities specialize in farming, fishing, and tourism. 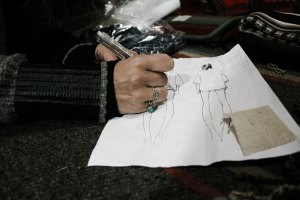 During my second week, textile development began. My plan for this collection was to remain true to the motifs of the culture but to use them in a more modern way by simplifying and enlarging them. The Threads of Peru team selected two communities – Upis and Huaran – to bring my designs to, based on the techniques and designs involved. Although I thought I was simplifying their original designs, the weavers initially felt like they were more complex! It was important for me as a designer to understand their weaving process and to collaborate to achieve the result I wanted. While my designs were a departure from what the artisans were used to, we needed each other to strategize for success. Through a lot of conversation – both in the field and in the office – and some trial and error, we managed to develop designs that were in line with my vision while still honoring the traditional techniques. And the weavers were really energized by the challenge! 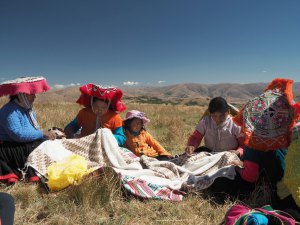 The artisan women always knew when Threads of Peru was coming – and it was an important occasion. A woman might walk as much as 1 hour over the mountain to attend the meeting. Emerging over the horizon, we would see a throng of women toting armfuls of raw alpaca and sheep’s wool – spinning beautiful yarn as they walk. Spinning, spinning – the women were perpetually spinning.*

*Threads of Peru buys yarn and woven products from the artisan women. Even store-bought yarn has to be re-spun (called “k’antiy” in Quechua) before it can be woven. So, for a scarf for example, the women will first spin the yarn using a traditional drop spindle. Threads of Peru then weighs the spun yarn and gives it back to the women for weaving. The women are paid in cash for both the spinning and the weaving. 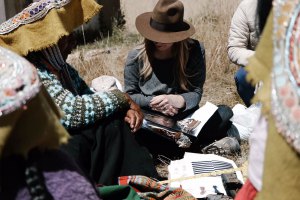 The women seated themselves in a large semicircle. I disseminated a few printouts and worked with Threads of Peru employee, Lourdes Hancco Chaucca, to explain the color ways in the local language, Quechua. It was really the first time that the artisan women had worked on an entire collection based on one color palette. They were interested in how the colors went together and I was happy to see that they liked the harmony of the tones. After the business of design was over we shared lunch, which arrived in the form of buckets of locally grown, freshly boiled potatoes carried out by the women. 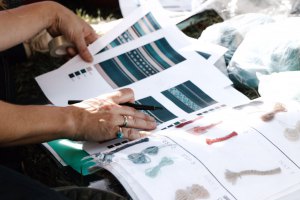 Back at the office, it was onto trim sourcing. I traipsed around Cusco inquiring with various vendors in my novice Spanish, navigating the stone streets as best I was able. I found some large paper meant for drafting hiking maps and began the garment patterns for the season. I regularly found that you didn’t need the official tools – just resourcefulness and an open mind. 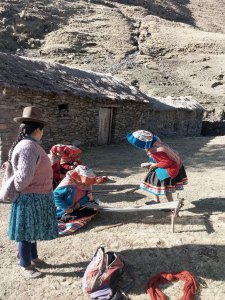 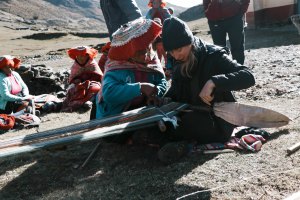 In my third week, we visited two more communities. These travels required a 3-day long trek across the Andes using three different modes of transportation! In Parobamba, we visited with Daniel Sonqo a master dyer and weaver. His family showed us great hospitality, cooking us dinner and hosting us for the evening. The next day after a bumpy ride in a produce truck and a 2 hour hike through the Andes we arrived in Pitukiska. A beautiful and remote village where we shared locally farmed food and lodging with an amazing family of weavers. There I got my first official try at the backstrap loom. I was also inspired by some of their personal textiles and created a whole new design to honor it. The Threads of Peru team was thrilled that the new collection would now have a designated piece that would be created by this amazing community of weavers. 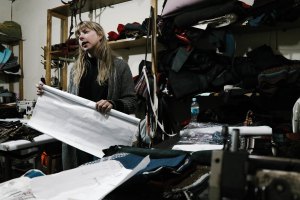 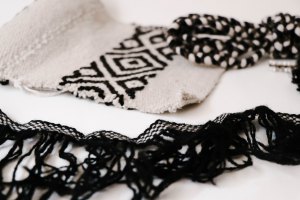 Back in Cusco it was time to wrap up my work and prepare everything for the Threads of Peru Project Coordinator, Ligia Gomez, to begin sampling. I completed all sketches and received prototype submissions from the artisan groups. While one missed the mark, the other was perfection! Our vision was starting to feel real. We had pushed the envelope to be certain, but sensed that this innovation was just what was needed to support Threads of Peru’s vision for its bright future. It was important to know that one could both honor traditional culture and techniques while fulfilling the vision of a New York designer.

I compiled a guide on color standards, so that every artisan community could have its own resource to reference. We received a fresh wave of prototype submissions from various artisan communities, and I swiftly supplied my comments to keep the development process coasting along. Amidst the flurry of activity, with a paperweight heart, I prepared for my departure and return to New York.

The past several weeks have found me back in New York, completing tech packs for all 47 SKUs and tying up loose ends on all textile designs. With the magic of Skype and Whatsapp, I have reviewed color submits from dyers and accessories prototypes from afar, giving my feedback in real time. When New York Now came to town, I hopped on over to the show offering my surrogate eyes and ears to Threads of Peru, scouting out opportunities for our planned collection launch in February. It’s only September now, but February will be here before we know it and I can’t wait to share this project with you.

I feel happy knowing that I was able to contribute to Threads of Peru’s long-term growth, even if in this small a way. “We were able to accomplish so much more than I ever expected!” Sarah exclaimed just before I left. “Honestly,” she went on, “this experience far exceeded my expectations. I feel like we not only have a quality collection to present next year, but also have a much more solid grounding in professional best practices in the area of design and collection planning.” I send my thanks to Threads of Peru and the Nest community, and urge you to continue your support for the global artisan community. My time in Peru is woven into my heart and I know it was the first trip of many. 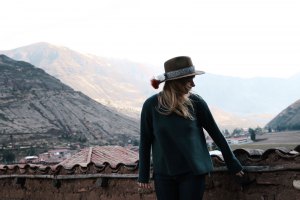