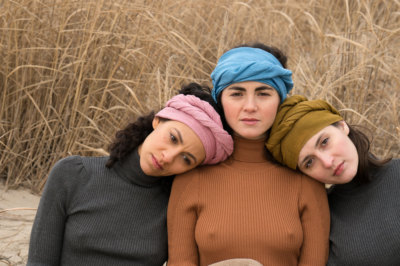 When Sasha Bromberg founded dotta project, her dream was to merge local craftsmanship made in post-Soviet countries with contemporary design vision. The dotta name itself is a simple word with sonic and graphic rhythm devoid of any pathos, embodying Sasha’s goal for the platform to support artisans in their own rights, not by way of charity or donation.

Sasha grew up in South Urals, region east of Moscow and north of Kazakhstan, where Tatar, Altaic and Slavic people shared a common daily life. This concept of multiculturalism sits at the heart of dotta, whose aim is to build cultural bridges by exposing the common threads that unite us instead of the differences that divide us. Sasha says: “when we see others not as an abstract mass, but as individual people, we can’t help but relate.

In an unlikely way, Sasha’s childhood introduced her to sustainable living. In the wake of an economic crash characterized by inflation and scarcity, the regional community repurposed and upcylced their resources, and relied on help from one another. Sasha reflects: “But for kids, it was a happy time. We found many simple pleasures without recourse to monetary experiences.”

dotta project focuses on textiles, connecting consumers to a unique selection of apparel, accessories, and homewares made in Central Asia, Russia or the Caucasus and sold on dottaproject.com. Currently, the project works with six artisan group in three countries, each group varied in its size and structure. While one Uzbek textile mill employs 400 people, it’s larger operations are complemented by that of women’s groups or family studios engaging as few as three people in craftwork. Many of the groups were initiated by women to generate work in areas facing weak labor markets.

The intention with each piece is to reexamine the evolving concept of craft, counteracting the negative outcomes of fast and mindless consumption. Sasha reflects: “Disposable culture fails to notice beauty in the way things age or in the imperfections of hand-stitches.” Seeking to play a role in cultural preservation, Sasha uses two criteria for selecting products for the project: items must be made locally and should also incorporate handmade craftsmanship. “It may seem naive to work on hand-loomed Ikat cottons during a time when we can print it in 3D, but these techniques are not outdated, they are intrinsically humanistic and cultural.” dotta project’s first collaborative collection features handknitting, wet-felting, nuno-felting, hand-woven pieces, and some naturally dyed wool accessories.

Sasha notes that these traditional textile practices often stem from historical and geographic contexts, explaining that “felting, one of the oldest fabric techniques, was developed among nomadic people due to its portability. Felt elements regularly show up in traditional Kyrgyz clothing like kalpak (wool hats for men), kementay robes, and beldemchi skirts with felted belts.”

Sasha feels grateful for the way that her work has fostered a deeper connection not only to the craft of her homeland, but also to the people behind it. At meeting with the owner of a textile mill in Uzbekistan that went overtime, Sasha once found herself having missed her train to the capital, Tashkent. In the midst of her dilemma, an artisan helped Sasha to find a driver headed in the right direction. When the driver pulled up, Sasha found four people already packed snugly inside the car! While the six-hour journey without air conditioning in the hottest of months proved physically demanding, it embodied for Sasha what makes her work at dotta project so important.

“There we were: five people from different places, as diverse as Taiwan, Russia, New York, and Uzbekistan, and we didn’t understand one another’s languages,” recalls Sasha. “But when the driver made a joke, we all laughed. People can relate to each other, through beauty or hardship, outside any cultural nuances. I think textiles are a medium of this cross-ethnic connection. They carry the voices of often times invisible communities in a way that speaks to everybody.”