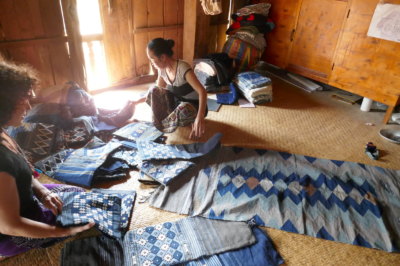 For her recent Nest Professional Fellowship, Fashion Designer and Professor in Fashion Design at Massachusetts College of Fashion and Design, Jennifer Varekamp, visited Ma Té Sai in Laos. Translating to “where is it from?” in Lao, Ma Té Sai is committed to connecting consumers to the remote craftspeople of Lao who produce its textiles and homewares by hand. Its goals are not only to transport the value of Laos’ ancient craft traditions to contemporary fashion and home design consumers, but also to ensure fair and sustainable livelihoods to the artisans it employs.

As she prepared for her fellowship in Laos, Jennifer’s goal was firstly to assess Ma Té Sai’s patterns and help optimize garment fit by grading sizes accurately and appropriately. This was particularly important for the men’s garments whose sizing had previously seen inconsistencies. If time allowed, Jennifer would also assist in developing a handful of new patterns alongside the artisan business. Jennifer’s vast experience in pattern making prompted her to begin her work prior to hitting the ground in Lao. She explains: “It takes time to achieve accurate measurements, fit and shaping – making preparation key to ensuring a productive experience onsite.”

While at home in Massachusetts, Jennifer drafted three men’s basic blocks (or slopers) in size 36 (small), 38 (med), and 40 (large). She also began developing the basic casual shirt style in size 38. Jennifer further set about gathering her own slopers (basic blocks) for the women’s bodice, skirt, and sleeves, all closely aligned to the measurements Ma Té Sai was currently using as their size “medium.” She pooled together her instructions, handouts, and samples, equipping herself with a small library of visuals to show the artisans once in Laos. Given that Jennifer would be working with the metric system instead of the familiar inches and yards she was accustomed to, she prepared conversion charts and ordered drafting supplies (like specific rulers including the French and hip curve) to leave behind with the artisans.

Once it Laos, Jennifer familiarized herself with the artisans, surrounding community, and craft itself. Within each village home was a loom, where every woman had grown up learning how to weave. Hands were critical to every stage of the production process, with women hand spinning the yarns used for weaving and then dying them using natural indigo and other plants native to the area. Jennifer says: “I was struck by the unique juxtaposition of centuries-old tradition brought together with an entirely forward-looking and enterprising spirit.” Quenching an eagerness amongst the artisan women to acquire new skills, Ma Té Sai’s business leader, Emi Weir, had also brought industrial sewing machines to the women’s homes, so that they could add sewing to their repertoires. Jennifer’s favorite aspect of the craft? The natural dying process. She says: “It opened up a whole other world to me to learn about the plants and processes, some of which were particular to the ethnic group of the TaiLeu.”

In less than two weeks, Jennifer was able to accomplish much alongside Emi and the artisans of Ma Té Sai. She provided a basic education in grading and introduced concepts of “ease” and “seam allowance” in contrast to grading. Each artisan was able to participate in a sample grading of a basic skirt pattern. Jennifer further assessed fit and shape for garments sold in Ma Té Sai’s store. She and Emi brought garment samples into the villages where the artisans worked and reviewed the artisans’ patterns for issues with shape and fit. Jennifer was able to work alongside the women to adjust existing patterns, with a particular focus on those patterns used for key pieces Emi hoped to expand production on. Jennifer also drafted a new men’s farmer shirt design based on drafts of the men’s slopers/blocks she had created back home.

What followed was some serious pattern making. Jennifer worked alongside the artisans to create the pattern for a new wrap skirt and reworked some existing shirt patterns to achieve more accurate shapes and styles. Says Jennifer: “I noticed that the women had been using patterns without seam allowance, which meant they would need to add seam allowance each time they cut a new pattern. Not only is the process inefficient, it opens up room for error.” To solve the challenge, Jennifer instructed the artisans on creating clean patterns with built-in seam allowance, which became incorporated into all their existing high-performing patterns. She demonstrated how to use guidelines on the sewing machine to ease the process. For a day following, the artisan women were left to tinker with the new lessons they’d absorbed. They tested out new patterns and sewed together samples for Jennifer to review.

When it came time for review, Jennifer and Emi were pleased with what they saw! The women had made samples for the wrap skirt, women’s cropped jacket, two women’s shirt designs, and the men’s farmer shirt. Says Jennifer: “It was great!! I was able to confidently grade them up and down in size before leaving.” Jennifer and Emi worked together to organize the patterns into plastic folders, zippered and labeled to make them easy to find –  and then stored them in a dry place. Emi and Brittany made a copy of the patterns to keep with them at the central workshop in Luang Prabang so that the patterns could then be used to aid future communications with the artisan women.

As Jennifer’s trip came to a close, she left the artisans with a parting gift: new rulers for pattern making. Says Jennifer: “I was so glad that I had brought them. I wasn’t certain if they had been using any or not. The curved ruler shapes will make it easier for the artisans to continue drafting armholes, sleeve caps, hip curves and necklines.” Jennifer left Lao marked by experience. She reflects: “This was my first time teaching with a translator and communicating across a language barrier. What’s amazing is that design, pattern development, and sewing all comprise a visual language in itself – one that transcends language barriers. I did also learn some basic terms in Lao that were important in aiding our communications. It was fun to try and speak  – we had many good laughs together.”

Jennifer adds: “Having been a teacher for many years now, I found it a wonderful lesson to see how I can transport my teaching overseas to remote areas with limited resources. Despite challenges like language barriers, I was able to teach and learn with the artisans in a new way. I’ve never been one to believe that the traditional classroom setting makes for the most productive learning experience – and my Fellowship confirmed for me that factors like hands-on trial and error and cultural immersion are critical in furthering effective knowledge share.”

The impact of Jennifer’s fellowship was felt strongly in the Ma Té Sa community. Says Emi Weir, the business’ leader: “Although Jennifer said she had not taught a group with another language before, she settled into Lao easily and had the girls working side by side with her very quickly. Her comfort in the village made it so easy. We quickly understood inconsistencies and how to address them by changing patterns to include seam allowance.” She adds: “The women now can now organize patterns better by utilizing Jennifer’s suggestions. We not only graded and adjusted our best-selling patterns, but also managed to complete the pattern for a new wrap skirt! This will be essential for the upcoming hot season sales.”