Makers United Launches with its First Workshop in Birmingham, Alabama 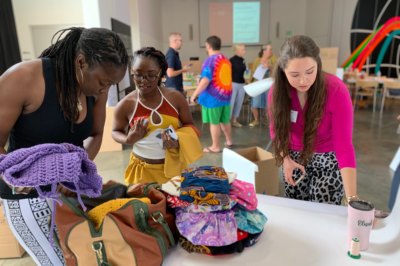 On July 18th through 20th, Nest kicked off our first Makers United workshop in Birmingham, Alabama, bringing together more than 50 makers from Birmingham and closely surrounding towns to learn from Nest team members and professionals from our national partners at Qurate Retail Group, Swarovski, and West Elm, about branding, digital marketing, selling, and merchandising. Of the participating makers, who tend to identify almost just as frequently as entrepreneurs as they do as makers, 82% reported that their business acumen increased following the workshops.

Workshops were designed to address targeted needs surfaced through a survey previously issued by Nest and our partners at Birmingham-based Quire consulting to more than 100 makers. In addition to furthering maker knowledge acquisition, the workshops were meant to help build a more unified maker community in Birmingham and to better connect hard-to-reach emerging makers with local resources and support systems. To this end, local community leaders from hubs like Pepper Place Market, Create Birmingham, and Operation Hope, also joined the experience.

Said Birmingham-based ceramicist, Meghan Howell, “The quality of information provided by the speakers and guest panels was so amazing, and really opened my eyes to so many Birmingham resources that I had no idea about before!” As another maker aptly put it, the experience was a bit “like camp – for makers!” “Camp” will resume session again from August 22nd through August 24th and will be followed by a local maker showcase in September, when brand buyers and the local public will be invited to peruse handcrafted items created by the burgeoning pool of talent emerging in Birmingham.

Central to Nest’s Makers United program is economic inclusivity and a goal to leverage the maker movement’s potential to generate opportunity for all makers in the United States, regardless of sex, race, economic means, or physical ability. More than one-third of Makers United participants in Birmingham identify as people of color. It was largely these makers who reported feeling that they lack access to local support systems and creative community in Birmingham, pointing to an even greater need to strengthen the inclusivity of programs geared towards makers and entrepreneurs in the area.

Nest extends our gratitude to the Mike & Gillian Goodrich Foundation, Mastercard Center for Inclusive Growth, The Same Sky Foundation at Tides, Kathryn Harbert, and the Community Foundation of Greater Birmingham for making Makers United: Birmingham possible. Makers United is traveling across the United States. Find us next in the Austin-San Antonio region, where we are already hard at work mapping the maker landscape – and watch for more updates to come!