Feting the Sari at the Nest x Border&Fall Sari Party 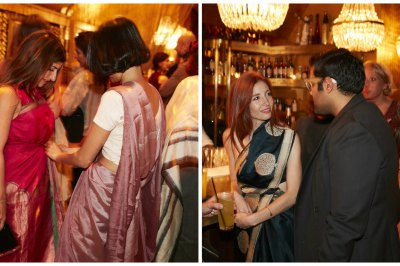 In Varanasi, India, the 500 year-old handloom silk-weaving tradition has been in grave decline, with the number of handloom weavers decreasing by an estimated 50% in the past ten years. Recognizing the long relationship between handloom weaving and the sari, Nest partnered with Border&Fall to host a Sari Party, celebrating the sari as relevant in contemporary fashion and calling on the fashion design community to help reverse the stereotypes leading to the sari’s demise. Hosts Lauren Hurst (Maiyet), Sarah Slustky (Stylist), and Negar Mohammadi (Vogue) were stylishly draped for the evening by India’s foremost sari expert, Rta Kapur Chishti, helping to demonstrate the modern appeal of the sari, which can be draped in more than 82 ways.

Throughout the evening, Goldbar bartenders poured custom mango mojito cocktails and VOSS water and guests enjoyed healthy bites from SemSom Eatery. Along with Nest Co-op members and other New York supporters, designers and design teams from brands like Mara Hoffman and Behno came out to show their support. CFDA Lexus Fashion Initiative designers, Nicholas and Chriz Kunz (Nicholas K) and Katie Deguzman and Michael Miller (K/ller Collection) made a special appearance post-awards and tested out The Bosco photo booth. A big thank you to everyone who was a part of this special evening, which raised vital funds for Nest’s work to innovate upon global craft traditions.

Please enter your details below to download the report. Fields marked * are mandatory.

Thanks for submitting your details. Download the report using the button below: