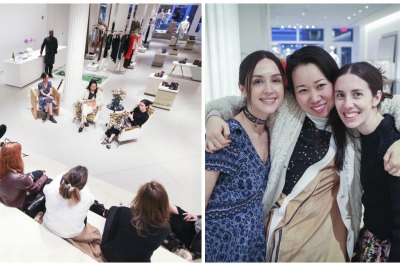 Nest Advisory Board member, Wen Zhou, grew up with the sound of her mother’s hand guided sewing machine humming in the background of her childhood. At the age of 9, she had her first pair of store bought shoes: before that, they were always handmade…

On May 9th at the airy 3.1 Phillip Lim store on 48 Great Jones Street in New York, Wen Zhou, co-founder of the coveted label, spoke with Nest Co-op members about her first memories of craft: “Those striped sweaters you see Chinese children wearing back in the day? Those were not really stripes. Every year we grew, our mothers knit another panel to add to last year’s sweater, creating the striped effect,” she explained.

Growing up in a home in which nearly everything was made by hand, Wen preserves a profound respect of craftsmanship and a deep connection to the people and processes behind how all 3.1 Phillip Lim clothes are produced. These are values she is passing down to her own daughter, who at 15 years old, has already shown signs of her mother’s entrepreneurial spirit and creative fervor. Ming makes hand-embroidered t-shirts and gives 40% of sales to causes she cares about like climate protection and clean water. (And between running 3.1 Phillip Lim, Wen makes the occasional delivery of Ming’s shirts to loyal clients across New York).

While Wen grew her relationship with craft in China, Rebecca van Bergen, Founder and Executive Director of Nest, homed her appreciation for making in St. Louis, Missouri in the United States. When her grandmother, who was raised in the rural South, fell in love with and married a Jewish man, she found herself abruptly cut off from her family lineage. Her personal ties to her own family’s history were recovered with needle and thread: by practicing the craft of quilt-making that her mother had taught to her. “Craft bridges generations,” reflected Rebecca, “and it binds us in its shared humanity.” Rebecca, also a mother to Ella, 4, finds it important to fill her home with creative influences and coloring is a favorite mother-daughter activity.

When asked about the future of craft in fashion, Rebecca and Wen share an optimistic view. As AI gadgets like Alexa creep towards becoming a family living room staple, digital, automated, smart technology threaten to encroach on the need for anything to be made by hand. But much as the food industry has returned to its roots, Wen and Rebecca see a future in which fashion follows suit – and who will turn the tide? Consumers. The power is ours to vote with our purchases for values of  authenticity, creativity, heritage, and mindfulness. We can be the generation that votes for craft.